The World Map of Social Networks 2012 has just been released. It shows the most popular social networking sites by country, according to Alexa traffic data (Google Trends for Websites was shut down on September 2012). 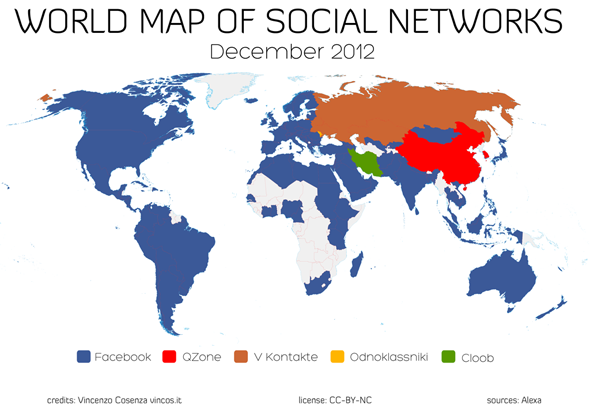 Facebook now has over 1 billion active users has established its leadership position in 127 out of 137 countries analyzed. One of the drivers of its growth is Asia that with 278 million users, surpassed Europe, 251 million, as the largest continent on Facebook. North America has 243 million users, South America 142 million. Africa, almost 52 million, and Oceania just 15 million (source: Facebook Ads Platform). In the latest months Zuckerberg’s Army conquered Armenia, Kyrgyzstan, Latvia and Vietnam.

Is it only a matter of time until Facebook rules the World??? (source The Next Web & Vincos)