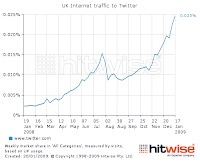 This article has been written in order to teach charities & non profits how to use Twitter.

Twitter has seen a massive increase here in the United Kingdom over the last year.

Twitter is now ranked as the 291st most visited website in the UK, up from a ranking of 2,953. Furthermore the average amount of time that people spend on Twitter has more than trebled from less than 10 minutes a year ago to half an hour now.

Twitter has been taken up largely amongst the young however the fastest growing age group of users is 35-44 year olds, who now account for 17.3% of UK visitors.

The amount of traffic Twitter sends to other websites has increased 30-fold over the last 12 months. Almost 10% goes to News and Media websites, 17.6% to entertainment websites, 14.6% to social networks, 6.6% to blogs and 4.5% to online retailers.

1> Claim your Twitter URL. If someone else decides take your charities twitter URL such as http://twitter.com/wwf it wil be very unlikely that you will be able to claim it back

2> Reskin the background image so it contains your charities logo, brief description and a link to your corporate site.

3> See what people are saying about your charity by using www.search.Twitter.com. Once you have read their tweets befriend them (especially influential news broadcasters, sneezers etc). Such searches take next to no time and if this process is carried out on a monthly bases your network should grow fairly rapidly.

4> Send out “Tweets” (twitter messages) to announce all new news, press releases etc and make sure that they include hyperlinks to your news articles in order to divert users to the charities website.

5> Use www.tiny.url to make your URLs within your tweets shorter. Twitter will usually carry out this process automatically. However on occasions due to human and/or Twitter error this does not occur. Therefore it is currently a good idea to change your URLs manually.