Global Penetration of Social Platforms by Age Groups – % change in millions of Active Users globally, between Q2 2012 and Q2 2013

Active Usage Measurement – % of Account Owners that are Active on the Platform in the past month globally, Q2 2013

1. The data in this report is sourced from the GlobalWebIndex and is the second of our quarterly Stream Social series, providing readers with a unique understanding (and the most recent independent global data) about current trends in the global social media environment. This report will reveal: Global Trends in Social Platform Adoption • Develop global, regional and local social priorities • Drive insights into engagement and adoption Detailed Demographics on Users • Learn how to tailor your strategy • Explore mainstreaming of social platforms Consumer Behaviour and Actions by PC, Mobile, and Tablet • Design platform specific strategy • Quantify key platform behaviours © 2013 GLOBALWEBINDEX

3. -100% -50% 0% 50% 100% Mixi (Japan Only) Me2Day (South Korea Only) Tuenti (Spain Only) Other Copains d'Avant (France Only) Nate Connect (South Korea Only) 51.com (China Only) Odnoklassniki (Russia Only) Badoo Kaixin (China Only) Qzone (China Only) Koprol (Indonesia Only) None of the Above RenRen (China Only) Sonico (Mexico Only) Viadeo Tencent Weibo Facebook vkontakte (Russia Only) Google+ Sina Weibo LinkedIn Twitter Mig33 (Indonesia Only) Tumblr Pinterest PINTEREST IS THE FASTEST GROWING GLOBAL SOCIAL NETWORK Source: GlobalWebIndex; Question: Which of the following social platforms have you used or contributed to in the past month?; Base: % change in millions of active users globally Pinterest and Tumblr take the top spots In the Q1 2013 Stream Social Report, GWI reported that Twitter was the fastest growing social platform between Q2 2012 and Q1 2013. Much has changed in a quarter, however, and now with a year-on-year (y-o-y) comparison, we see that both Pinterest and Tumblr have grown more than any other social platform between Q2 2012 and Q2 2013, by 88% and 74% respectively. Global Penetration of Social Platform – Active Usage, % change in millions of Active Users globally, between Q2 2012 and Q2 2013

5. 39% 61% 39% 61% 44% 56% 49% 51% FACEBOOK MAINTAINS THE HIGHEST ENGAGEMENT RATE AMONG ACCOUNT OWNERS Source: GlobalWebIndex, Questions: On which of the following social platforms do you have an account? & On which of the following services have you used or contributed to in the past month?; Base % of internet users globally aged 16 to 65 62% 38% Active Non-Active The engagement rate of active users to account holders decreased for all top 5 social networks compared with Q1 2013. Despite that, Facebook still remains the leader in engaging its audience with 62% of active account holders. The gap between engagement of Google+ and Twitter has widened over the past quarter with microblog’s account holders being 10% more likely to use it actively than those who signed up to Google+. The two main emerging platforms proved to be equally engaging in Q2 2013. Active Usage Measurement – % of Account Owners that are Active on the Platform in the past month globally, Q2 2013

6. GO DEEPER TO GET THIS DATA TAILORED TO YOUR TARGET AUDIENCE Get the detailed data behind each chart – split by key demographics and countries Get the data packs STREAM ON- DEMAND DATA PACKS WANT MORE? PRO Platform Customise all the data and insights in our web based analysis platform Find out more Contact our team to customise to your brand, business and target audience Learn more © 2013 GLOBALWEBINDEX

Easy explanation as to how posting messages on Google+ works breaking down "who will see my Google+ Post".

To celebrate Pacmans 30th Birthday Google have changed their homepage logo into an interactive PacMan game. This is probably the coolest thing Google has ever done. I am a PacMan lover, and bid them a happy 30th Birthday. The object of the game you is to evade the ghosts Inky, Blinky, Pinky and Clyde and much on as many yellow dots as possible (as if you don't know).

To play, simply click the button that usually says "I'm feeling lucky" but now has the legend "Insert Coin". However, if you don't do anything, the game will start by itself. If you click twice on "Insert Coin" then two people can play. Ms Pac-Man joins the game, with the second person controlling her movements using the WASD keys. 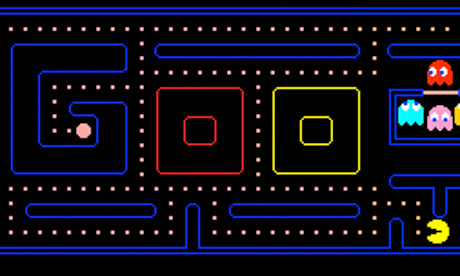